"We cannot make events. Our business is wisely to improve them... Mankind are governed more by their feelings than by reason. Events which excite those feelings will produce wonderful effects." ~ Samuel Adams 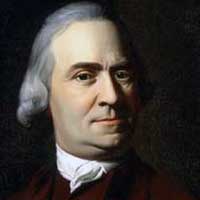 Called "the Man of the Revolution" by Thomas Jefferson, patriot and politician Samuel Adams (1722-1803) was born on this day in Boston, Massachusetts.

"The natural liberty of man is to be free from any superior power," said Adams, who graduated from Harvard and was the cousin of John Adams. Young Samuel worked in his father's brewery before turning to politics.

"While the people are virtuous they cannot be subdued," he said. "Once they lose their virtue, they will be ready to surrender their liberties to the first external or internal invader."

A skilled writer and orator, Adams was a passionate advocate against England's rule over the colonies.

Opposed to the Stamp Act, he and his fellow Sons of Liberty revolutionaries played a central role in organizing the Boston Tea Party of 1773.

"Among the natural rights of the colonists are these: First a right to life, secondly to liberty, and thirdly to property; together with the right to defend them in the best manner they can," he said.

Known for his patience and strong self-discipline, Adams was a close friend of John Hancock and member of the Continental Congress. He signed the Declaration of Independence and was elected governor of Massachusetts from 1793 to 1797.

Adams was a visionary who saw America as a land of freedom and self-rule. His words and actions laid the foundation for the new nation.

"It does not require a majority to prevail, but rather an irate, tireless minority keen to set brush fires in people's minds," he said.

Go for the excitement.