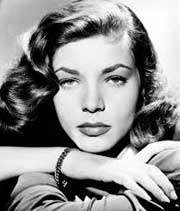 Lauren Bacall (1924-2014) was born Betty Joan Perske on this day in Greenwich Village.

Of her childhood she said, "I loved to dream about other worlds and other lives...I loved to pretend, and all that was in tandem with my wanting to be an actress."

Tall, angular, and sexy, she appeared on the cover of Harper's Bazaar at 19, with head lowered and eyes smoldering, she was dubbed as having "The Look."

"I used to tremble from nerves so badly," she explained. "The only way I could hold my head steady was to lower my chin practically to my chest and look up at Bogie.

That was the beginning of 'The Look.' I still get the shakes from time to time."

The magazine cover led to director Howard Hawks casting her in To Have and Have Not (1944) with Humphrey Bogart, where she delivered the now-famous line, "You know how to whistle, don't you? You just put your lips together--and blow."

And Bogie (along with the world) whistled.

Bogie and Bacall married a year later and starred in five pictures together. "Bogie was a very complicated, fascinating man," Bacall remembered about her great love.

"Trouble for a nineteen year-old because I didn't know anything, but (he was) totally solid and totally dependable. Character just oozed out of his pores."

"No one has ever written a romance better than we lived it."

She triumphed on Broadway, wrote her biography, was called one of the "50 Most Beautiful People in the World" (1997) by People magazine, and received an honorary Oscar (2009).

"These are the good old days," she said.