"Music is the wine that fills the cup of silence." ~ Robert Fripp 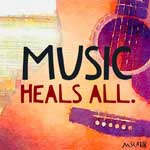 I wanted to use some kind of name so people would know where I was from. So I took the name "bluegrass." There is not a prettier name in the whole world. ~ Bill Monroe, Artists of American Folk Music

People listen to the music and sense what it is about. Sometimes they know exactly what the songs are about, sometimes they interpret their own meaning to the music, and that's great when this happens because it shows it's striking a chord. ~ Enya

There is a big, beautiful world that could be destroyed by selfishness and foolishness. We musicians have it within our power to help save it. In a small way, every single one of us counts. ~ Pete Seeger, Artists of American Folk Music

No particular music makes me feel nostalgic. If it's great, it just keeps me in the present moment. That level of music is like a classic story, like the Iliad--something so perfect it can never be old. ~ Wynton Marsalis, O, 4/04

Mozart has the classic purity of light and the blue ocean; Beethoven the romantic grandeur which belongs to the storms of air and sea, and while the soul of Mozart seems to dwell on the ethereal peaks of Olympus, that of Beethoven climbs shuddering the storm-beaten sides of a Sinai. Blessed be they both! Each represents a moment of the ideal life, each does us good. Our love is due to both. ~ Henri-FrÚdÚric Amiel

All talk of method and style seemed suddenly trivial; I became interested in meaning. I wanted to say something musically about life and living. ~ Ellen Taaffe Zwilich

A song ain't nothing but a conversation fixed up to where you can talk it over and over without getting tired of it." ~ Woody Guthrie, Artists of American Folk Music

Country sure has changed in the last 10 years. It was one thing, then it was another. Country has slowly marched toward a rock beat and rock preservation. Country artists of today. Man! That's how I used to sound in the '80s. ~ John Mellencamp, Knight-Ridder/Tribune, 4/28/05

The bandstand should be treated with the same sanctity you'd treat an altar. ~ Benny Powell

Any audience, as a rule, goes for a fast number. ~ Elvis Presley