"Everyday is a compromise." ~ David Letterman 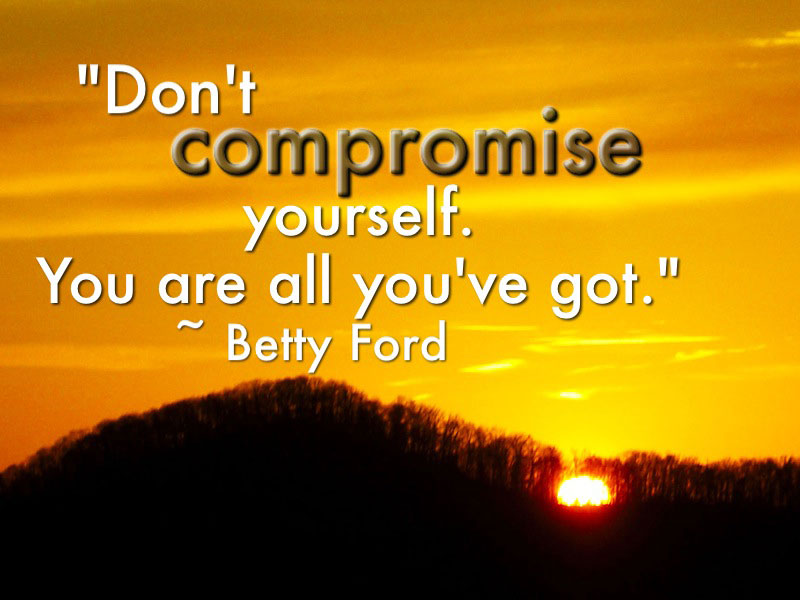 For us artists there waits the joyous compromise through art, with all that has wounded or defeated us in daily life... not to evade destiny, as the ordinary people try to do, but to fulfil it in its true potential the imagination. ~ Lawrence Durrell

The opposite of compromise is character. ~ Frederick Douglass

Prudence and compromise are necessary means, but every man should have an impudent end which he will not compromise. ~ Charles Horton Cooley

Do compromises work? Have you ever tasted rose? ~ Jeff Green

Learn the wisdom of compromise, for it is better to bend a little than to break. ~ Jane Wells

A compromise is the art of dividing a cake in such a way that everyone believes he has the biggest piece. ~ Paul Gauguin

Iĺve a theory that one can always get anything one wants if one will pay the price. And do you know what the price is, nine times out of ten? Compromise. ~ Agatha Christie

All big things in human history have been arrived at slowly and through many compromises. ~ Eleanor Roosevelt

We all have a childhood dream that when there is love, everything goes like silk, but the reality is that marriage requires a lot of compromise. ~ Raquel Welch

You might as well fall flat on your face as lean over too far backward. ~ James Thurber

I've never compromised who I am not ever. If I've gotten anywhere in my life it's been on my own merits. ~ Cher

Our worth is not based upon the purity of our actions, but upon the integrity of the compromises we make. ~ Bill Weber

Lasting change is a series of compromises. And compromise is all right, as long your values don't change. ~ Jane Goodall

Strong men don't compromise, it is said, and principles should never be compromised. ~ Andrew Carnegie