Amazon.com Widgets June 27 ~  Painful, But Superficial My Life & The Principles for Success 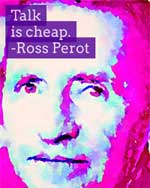 Born on this day in Texarkana, Texas, Henry Ross Perot (1930-2019) was a self-made billionaire philanthropist by the age of 38 with his computer service company Electronic Data Systems Corp (EDS). He sold the company to General Motors in 1984 for $2.5 billion.

Praising his "personal, crusade" on behalf of American soldiers, Perot received the United States Department of Defense Medal for Distinguished Public Service in 1972 after working to free POWs in Southeast Asia.

In 1979, he also funded a successful rescue operation of two of his employees from an Iranian prison.

"Most people give up just when they're about to achieve success," he said. "They quit on the one yard line. They give up at the last minute of the game, one foot from a winning touchdown."

Going for the touchdown, he ran for President as an independent candidate in 1992.

A cowboy, with a can-do spirit and tenacious knack for sound-bites, the quirky Perot self-financed his campaign and gathered wide-spread, grassroots support despite little political experience.

Some people called him a loose cannon, others chuckled, but when the votes were counted, he had gathered about 19.7 million votes, about 19% of the total. This margin helped Bill Clinton beat incumbent President George H.W. Bush.

"Talk is cheap." Perot once said. "Words are plentiful. Deeds are precious."

Among his "precious" deeds, Perot helped establish the Reform Party and ran again for President in 1996. Excluded from the Presidential debates, Perot gathered 8% of the popular vote his second time out.

"If someone is blessed as I am and is not willing to clean out the barn," he said. "Who will?"