May 14 ~  New Ideas Art of Innovation

"By recognizing people's contributions, you inspire them to bring new ideas to the table and to take it upon themselves to make this a better place to work." ~ Betsy McLaughlin 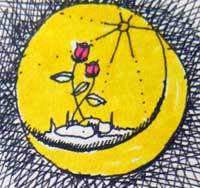 New ideas, like seedlings, grow and flourish with attention. New ideas are precious.

"A man paints with his brains and not with his hands," said the great artist Michelangelo

Sometimes our internal voice of "reason" or the judgment of others can destroy a new idea before it has a chance to bloom. But sometimes doubts give birth to even greater ideas.

Consider inventor Gary Dahl who came up with an idea for a Pet Rock, then took the idea a step further and decided to market a book giving instructions on how to care for the Pet Rock.

Or consider 3M employee Art Fry who sang in a choir and used bits of paper to mark notations on his hymns. He made an adhesive backing to keep the notes from falling out of his books. That's how Post-It Notes were born.

Both innovations were called ludicrous... at first...

"A man with a new idea is a crank," observed Mark Twain, "until the idea succeeds."

Every idea is a seedling waiting to blossom into genius.