April 17 ~Ý Death of Every Friend Out of a Dream

"With the death of every friend I love... a part of me has been buried... but their contribution to my being of happiness, strength, and understanding remains to sustain me in my altered world." ~ Helen Keller 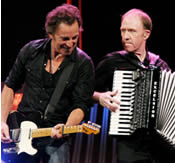 A sad day on E Street on this day in 2008 as Bruce Springsteen's keyboardist and lifelong friend, Daniel Paul Federici (1950-2008), lost his three-year battle with melonoma.

"Who knew that something as simple as a proper sunscreen or keeping yourself covered up on a sunny day could one day save your life?" Federici said about his fight with skin cancer.

"If you're fair skinned, have freckles, or light eyes. Be aware of the dangers, take precaution, and have yourself checked out regularly by a dermatologist from head to toe. It could absolutely make the difference in your life."

Born in Flemington, New Jersey, Federici learned how to play the accordion at age seven by watching Myron Floren, the accordionist on the Lawrence Welk Show. With a passion for blues and jazz, he started playing music with Springsteen in the late 1960s, laying the foundation for the E Street sound.

"Bruce has been supportive throughout my life," Federici once said. "I've had my ups and downs, and I've certainly given him a run for his money, and he's always been there for me."

L.A. Times critic Robert Hilburn said Federici brought a "soulful seasoning" to the band. "Sometimes it felt like the New Jersey shore, where he came from: sometimes bright, sometimes melancholy."

Taking a leave of absence during the band's tour in November 2007 to pursue aggressive treatment, Federici made a final, impromptu appearance with the band in Indianapolis, a month before his death.

With passion, Federici played notes of promise and tattooed his musical stamp on The Promised Land, Hungry Heart, My City of Ruins, and Asbury Park (Sandy). Springsteen said Federici's "organ and accordion playing brought the boardwalks of Central and South Jersey alive in my music..."

"...Danny and I worked together for 40 years - he was the most wonderfully fluid keyboard player and a pure natural musician. I loved him very much...we grew up together."