"There is great treasure there behind our skull and this is true about all of us. This little treasure has great, great powers, and I would say we only have learnt a very, very small part of what it can do." ~ Isaac Bashevis Singer 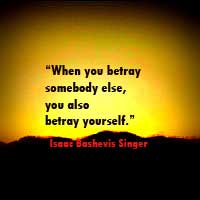 A celebration of the great treasure "behind the skull," Yiddish novelist and short-story writer Isaac Bashevis Singer (1904–1991) was born the son of a Hasidic rabbi in Warsaw, Poland.

He emigrated to America in 1935, the year he published his first novel, Satan in Goray.

"Sometimes love is stronger than a man's convictions," he once said.

An expert on Jewish culture, Singer kept his heritage alive with stories that were first printed in The Jewish Daily Forward, the newspaper considered the voice and conscience of the American Jew.

"If I make a mistake about the Jewish law or a street in Warsaw, I get hundreds of letters upbraiding me," Singer explained.

Praised for his "impassioned narratives," he was presented the Nobel Prize for Literature in 1978 and acclaimed for such fiction as The Family Moskat (1950), Gimpel the Fool: And Other Stories (1957), and The Manor (1967).

"Sometimes love is stronger than man's convictions," he said and brought universal emotions to life.

An advocate for keeping the Yiddish language alive, by the 1970s, he was considered an international expert on culture and wrote prolifically and with passion until his death.

Barbra Streisand's 1983 musical Yentl was based on his story, Yentle the Yeshiva Boy. Singer panned the film.

"If you keep saying that things are going to be bad, you have a chance of being a prophet," said Singer, who like Hemingway, wrote with short, declarative sentences and looked at life with wisdom and compassion for the human spirit.

He said, "When you betray somebody else, you also betray yourself."

You possess a great treasure inside.