February 16 ~  Curl Up Inside Your Heart Guide to Normandy

"God is so big He can cover the whole world with His love, and so small He can curl up inside your heart." ~ June Masters Bacher 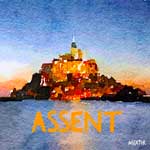 The spire of Mont-St-Michel's medieval abbey reaches magnificently to heaven. The Benedictine monastery, La Merveille, "The Marvel," is built on a rocky tidal island, ringed by treacherous quicksand and ocean of Normandy, France.

Pictures cannot capture the wonder of Mont-St.-Michel, its silhouette against the horizon is too beautiful for words. The great Gothic church and abbey atop the Mont celebrate architectural divinity and sing of the strength of the spirit.

Hermits lived on the islet as early as the 6th century. According to legend, in 708, the Archangel Michael in three separate dreams told Aubert, Bishop of Avranches, to build an oratory on the rock, accessible only at low tide. The fortification became a spiritual haven during the Middle Ages.

The miracle of this place, said writer Nicolas Simonnet, provides "a link with the life and history of man."

Between sea and countryside, Mont-St-Michel has been a place of pilgrimage for over a thousand years, withstanding age, fires, and wars. Spring continues to bring picturesque high tides and inspiration.

Today tourists abound and a handful of monks continue to live in the abbey. The Monastic Fraternities of Jerusalem make sure prayers are said at all times. And Mass is celebrated daily at lunchtime.

In 1884, writer Victor Hugo said, "Mont-St-Michel is for France what the great Pyramid is for Egypt."

As philosopher Francis Bacon once observed, "Give to faith the things which belong to faith." Certainly the spirit of Mont-St-Michel celebrates faith and the presence of God throughout the ages.

Celebrate the magnificence of faith